Flag-waving Citizens from Darburuq to Burao welcome president Bihi as he tours Sahil and Toghdeer regions where he inspects government facilities, meets local traditional and political leaders as well as ordinary citizens.

The eastern regions of Toghdeer and Sahil are basking in the glory of the reception they have and are according the president of Somaliland and his large entourage now in the east of the country.
From Hargeisa to Berbera and now Burao the head of state received a warm welcome from wet twigs and flag waving residents in their hundreds in Small villages and thousands in big towns.

Currently in Burao the capital of Toghdeer region the presidential entourage now in its third day of this grand tour saw him start engaging with his constituents in Da’ar-budhuq, Abdal, Hamas and other towns located between Hargeisa and Berbera.

Accorded a similar reception in Berbera the capital of Sahil region where he spent the night the Somaliland head of state inspected various public service provision facilities among them the Berbera port.

At the country’s main port president Bihi was given a detailed briefing which concluded with a ride aboard a new tugboat as well as taking time to direct incoming ships at the control centre.

From Berbera where it was given a farewell equal to reception the presidential entourage on its way to Burao found hundreds of citizens lining the road in welcome.
At the mountainous Sheikh town halfway between Berbera and the Toghdeer regional capital the head of state took time to visit the reckoned with Sheikh Secondary school where he parleyed both students and management.

Accompanied by members of the delegation accompanying him on his trip, the President was welcomed by the school’s senior management and went one by one to the various classrooms of the school where regular classes were taking place.
The president inspected the general condition of the school and the educational process, and was briefed by the school administration, and students Representative s in each class who gave an overview of their boarding conditions learning process.

After completing the Sheikh school inspection the head of state resumed his trip to Burao which saw him get a warm reception from residents awaiting him at Karasharka and Qoyta, 20 kilometres northwest of Burao
For the 20kms to Burao town the president Bihi entourage now consisting of hundreds of people welcoming committee led by the Toghdeer regional administration and Burao district officials and including traditional leaders, women, youth, scholars, parliamentarians and politicians was escorted by a platoon of horses all the way to town.

Awaiting the head of state at Burao town was a reception similar to that of Berbera but with a larger number of citizens.

In his ongoing stay in Burao the president has apart from engaging with members of the public, held talks with Toghdeer traditional and political leaders where issues pertinent to the region were addressed.

While in the Toghdeer regional capital head of state also officiated at 10th graduation ceremony of the local public institution of higher learning , the University of Burao where 499 graduates from various faculties received their bachelor degrees.

The excitement of residents mostly from the opposition party Wadani in both Sahil and Toghdeer in reception of President Bih who is from the Kulmiye party is testimony that citizens of Somaliland are no longer pursuing clan but national interests. 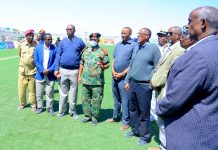 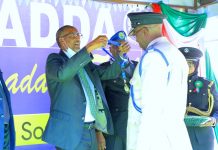 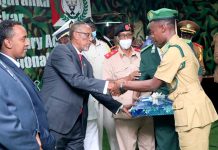